Where the Heck Have I Been?!

Wow, I have not posted on here since October.  It has seriously been the craziest and most unexpected 5 months or so in my world.  Last year, I was “wheelin and dealin,” you might say; cookbook author, national and local TV spots, selling a few houses in Franklin, oh and being a new momma on top of that.  My how quickly things can change.  One thing is for sure – we really aren’t in control.  Ha.  I’ve had to learn that the hard way this winter.   Countless times I have considered writing a new post on here, but I really didn’t have the words.  I didn’t want to make any promises or declare anything about what was going on, because I really didn’t know what was going on.  Since so many people have supported my cookbook and even just my recipe posts over the years, I figured an update on WHERE THE HECK I HAVE BEEN might be appreciated. 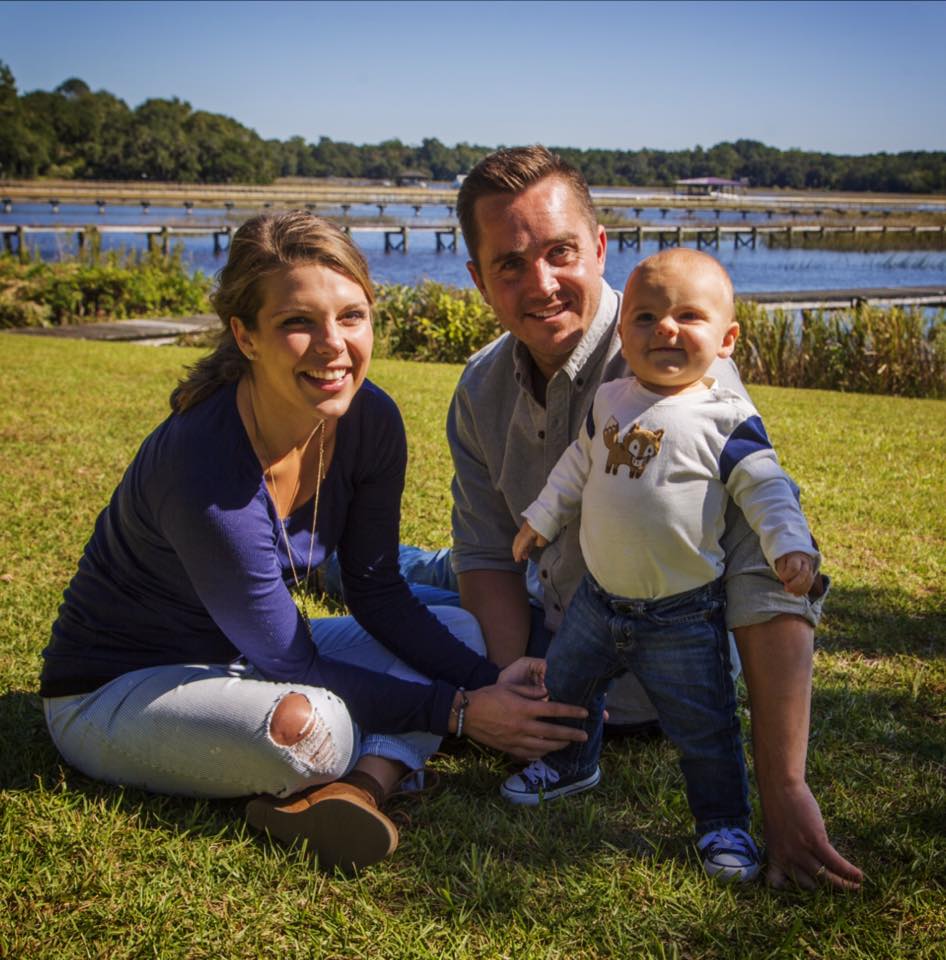 In Charleston soaking up the sun right before all of the craziness began.

So, here’s a run down of events, I finished most of my book marketing events and signings in October.  We went on a trip to Charleston for a wedding, and I was feeling totally normal.  I was a little tired from the busyness of the summer, but over all, I was fine.  The weekend after we got back, towards the end of October, I woke up feeling very strange; light headed, nauseas, chills, and just overall unwell.  It hit me ALL OF THE SUDDEN.  I went to the doctor immediately, and they said it was probably a virus and gave me something for the nausea.  After a week, I still wasn’t better.  I could hardly get off the couch and just feeding Maverick or changing his diaper seemed to take all of my strength.  At this point, I was pretty worried.  I knew my body, and I had ever experienced anything like this.  I had a speaking event coming up at a church a few weeks later, which was really the last thing I had on my calendar work wise for the year.  I thought surely I would be fine by then, but to my surprise, the weeks went by, and I still wasn’t well. 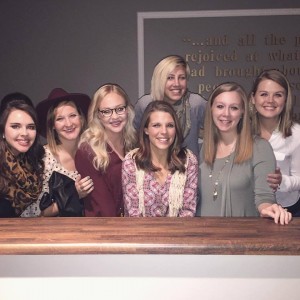 My sweet friends who came to support me at my speaking event at Calvary Baptist Church.  God gave me the energy I needed for this, but I had barely eaten for 3 weeks prior…pictures are deceiving.

Doctors seemed to be baffled, I had lots of tests and scans, and everything came back normal.  I kept hearing from God that I needed to just “WAIT,” but that seemed pretty counter intuitive.  As time went on I would feel better for a day or two, and then I would have a relapse of symptoms.  This was forcing me to put my life on hold.  I had so much anxiety about what was wrong with me, and I have no doubt that made my symptoms even worse.  Typically, I would not call myself an extremely anxious person, but during this ordeal my lack of control was enough to send me into a panic at times.  I couldn’t stand not knowing what was wrong with me and continuing to wake up just feeling ill and not myself.  I researched all kinds of strange diseases and illness, none of which I actually had, but I couldn’t help myself.  Throughout this season, I had definite moments of clarity and times when I heard God speak loudly, but I had many dark days of confusion and uncertainty as well.

Finally at the end of January, I started to see some real improvement.  I also saw one last doctor, an internist at St Thomas, who confirmed what other doctors had suspected all along, I had a virus that my body was just having a really hard time fighting off.  I realize people have much more difficult health battles to fight than this, but for someone with no medical history, 3 months of a mystery illness was super hard for me on so many levels.  In the past, I have definitely prided myself on my health and ability to control my circumstances.  I’m pretty sure “I can do it all” has been my motto since having Maverick, but God pretty much said “Hey, you aren’t defined by all that “stuff” you pride yourself on, am I really enough for you?.”  Whoa.  Talk about a REALITY CHECK.

Even though, I have felt well since February, my immune system has still been weak, I’ve caught several colds and even Hand, Foot, and Mouth from Mav last week!   Obviously, I’m not totally out of the woods, but I’m taking lots of immune building supplements as well as keeping my diet pretty clean.  Except for the occasional Saturday morning doughnut! 😉 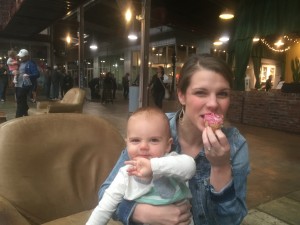 Doughnuts with my boy!

So, what’s next for my cooking career?  Well, for right now I am cooking as much as ever, but without an agenda!   It’s been all about using real ingredients, and taking healthy cooking to a new level for me and my family.  I am experimenting with new recipes and just enjoying cooking for my people.  This was the whole reason I fell in love with cooking in the first place, and I’m just getting back to my cooking roots, if you will.  During my illness, I had totally taken a break from “creative cooking” and definitely from recipe creating, it was survival mode.  Once I got my feet under me, I found myself unsure of where to pick back up with this whole cooking gig.  The book is out and the marketing of that is pretty well over, I don’t really have an obvious next step in my cooking career.

The truth is I have continued to hear God saying “WAIT.”  Even now, I believe I am supposed to cook for my family, and serve my son, husband, and those around me in a way I haven’t had the time to do in the past year or so.  I’m going to be supporting Zach with real estate and the houses he is working on this spring and summer, because to be honest, it’s his time.  He has been so supportive of me and my dreams and put up with a lot during this crazy winter.  He deserves me to be “all in” as a wife, business partner and manager of all things McKinney house and home for now.  I know that God has a plan, and my cooking career is not over, but for now it’s on hold, until God says GO.

Before my illness, I would have never dreamed this is how I would be starting 2016.  It’s very hard for me not to be on the hunt for a new project now that I am feeling better.  I feel the pressure that I’ve put on myself that says being a mom and wife is not enough.  I feel the tension of wanting to do more, but I must be obedient in what I hear God saying to me now.  I don’t know if that means a month, a year, or longer of taking a break, but I’m trying to be WILLING (my word for 2016) to do as He asks.  His plans are always greater and ultimately, I want to serve Him and others with my whole heart.

So, I may post a recipe for fun here or there, but for now, no big plans.  I guess you could say I’m just high on LIVING the simple life.  Spring is here, sun is shining, Easter is coming, and Jesus is making ALL THINGS NEW.

Thank you for the prayers of healing and support, I’ll be back! 😉

What to look for in remedies online? Remedies like Deltasone usually is used to solve conditions such as breathing problems. Prednisone is a white to almost white powder. Kamagra is for the treatment of inability to get or keep an erection and similar states united to erectile dysfunction. If you’re concerned about sexual problem, you have to talk to your physician about http://journal-info.net/buy/generic-levitra.html and buy generic levitra. What is the most substantial information you have to consider about kamagra? (Read more buy vardenafil). Betweentimes men need medications to resolve sexual heartiness problem. Having erectile malfunction can certainly complicate dating. Some medicines may interact with this physic, including over-the-counter herbal products. Not all probable interactions are listed in rule curing guide. Don’t forget, the best way to avoid forged medications is to get prescription drugs like Kamagra from a reliable online service with which you are familiar.

8 Responses to Where the Heck Have I Been?!

I am thrilled to announce that my first cookbook, "The Outdoor Table," published by Thomas Nelson Published is available to purchase wherever books are sold! This beautiful book includes 175 EXCLUSIVE recipes, not found on this site, perfect for all of your outdoor entertaining! Find out more and order your copy here... 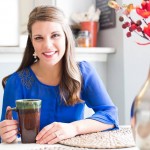 Hey Y'all!  Well I'm a southern gal, raised in Tennessee, where I still live with my husband and baby boy!  Creating fresh and simple recipes with a southern flare, while sharing bits of my life with y'all on camera is what this site is all about.  Also, my very first cookbook with Thomas Nelson Publishers will be out Spring of 2015, and I just can't wait to share it with you all!  Read more about April...